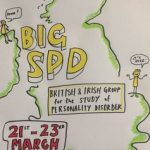 The conference programme can be found here

In 2017 we were delighted to hold the conference at the Kingsmills Hotel, a 17th century mansion set in four acres of grounds, amidst the beautiful scenery of Inverness – the ‘Highlands Capital’ of Scotland. Many thanks to the local team for such a well organised conference.
A big thank you to Tom Bailey for his fantastic art work of all the discussions at the conference and his summary.
Highlights of the conference included keynote addresses from Professor Peter Fonagy, the 2017 Senior Scientist award winner, from 2017 Senior Practitioner Award winner, Dr Jackie Craisatti, and from our keynote speaker Dr Lucy Johnstone. We also enjoyed a talk by Alan Bissett about our identity and sense of community.

Dr Lucy Johnstone gave an overview of current challenges and alternatives to psychiatric classification, with particular reference to the contested category of ‘personality disorder.’ She argued that it is time to abandon a term that lacks validity and is often experienced as harmful by service users. She outlined the principles of a forthcoming non-medical framework for understanding emotional distress, unusual experiences and troubled or troubling behaviour.

Professor Fonagy’s talk focused on the concept of epistemic trust as it relates to our conceptualization of personality disorder. Asking, if the apparent rigidity of personality disorder is the consequence of problems being embedded in character, as traditionally thought, or a more specific difficulty in placing trust in socially communicated knowledge and information? Should we consider this a disorder or is it better seen as a failure to engage in regular interpersonal communication that protects us at times of social change?